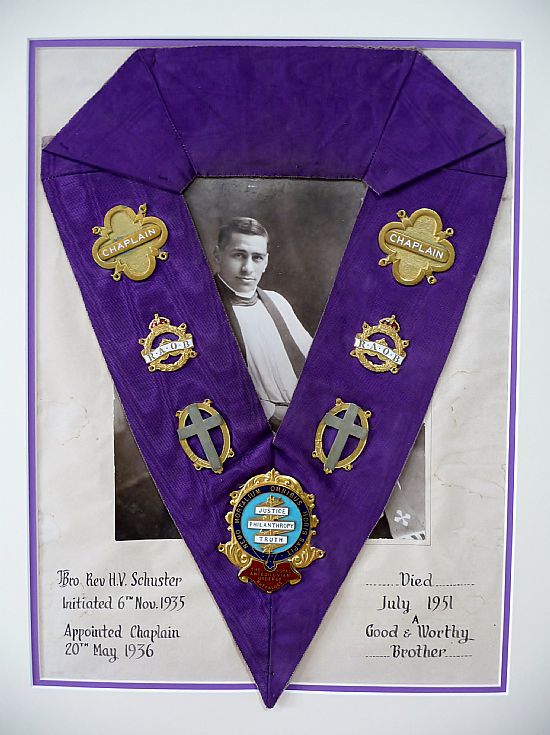 Who was Reverend H V Schuster, and how did he come to have his picture in The Clink at St. Tudy?

Harold Vernon Schuster was born Reverend H.V. Schuster M.A. on the 30th of July 1878, in Tavistock, Devon, and was Baptised on the 2nd of October 1878 in St. Mary, Blackburn, Lancashire, by his father, Edmund Vernon Schuster, who was a Minister.

His Father, Edmund Vernon Schuster, was born in Manchester in 1848, and was a member of the Clergy and a Freemason.  His Mother Isabella Baynes, was also born Manchester.  Isabella was the Daughter of a Cotton Merchant and Manufacturer.  Isabella's father was also Alderman Magistrate for Blackburn.

Harold's Grandfather and Grandmother (Samuel Schuster and Friedericke Speyer) were originally from Frankfurt, Germany.  They moved from Germany to London in July 1838, and by 1839 had moved to Bradford, Yorkshire, and then moved onto Manchester, ten years later.  They were wealthy general merchants.

In 1900 Harold went to Wells Theological College and obtained his Bachelor of Arts from Christ Church College, Oxford.  In the 1901 Census Harold is listed as a Theological Student and lives in a boarding house in Vicars Close, Wells.  Vicars Close was built in the mid 14th Century, and owned by Wells Cathedral.  It is claimed to be the oldest purely residential street with original buildings surviving intact in Europe.

Reverend Schuster's career was as follows:

He was Ordained Deacon in 1901 Diocese of London for the Diocese of Hereford.

Curate Licentiate to Officiate Diocese of Sarum and Winchester From 1945.

Licentiate to the Diocese of Portsmouth from 1947.

When he left Down Hatherley the parishioners got together for a meeting in the local schoolroom, and presented Reverend and Mrs Schuster with a silver tea service, suitably engraved.  “Mr Smith in making the presentation spoke of the very deep regret  felt in the parish upon losing the Reverend and Mrs Schuster from their midst, and the very great pleasure it was for the parishioners to make this gift in token of their gratitude for the good work carried out by them”.  “Mr T Jones of Churchtown also spoke to the same effect, and remarked on the very warm welcome which was likely to await them in their new home, a parish so well known by his brother”.

Reverend Schuster and his Wife, Elsie, came to St. Tudy in June 1926, and was listed in the 1939 Kelly's Directory as living at the Rectory which was owned by Christ Church, Oxford where he had studied.

Pamela and Enid were both married in St. Tudy church and went to live in Hereford, and Hampshire respectively.

Edward Vernon went to live in Egypt in 1935, he was a Captain at that time in the Royal Tank Regiment and reached the rank of Major in 1952.  He then lived in Camberley, Surrey.

Harold Herbert Percy joined the DCLI in WW2, and reached the rank of 2nd Lieutenant.  After the war, he lived in Hereford and then Fulham, London.

Reverend Schuster remained in St. Tudy until 1945, and must have been very involved in the local community as he headed up the “Buffs” that met in the Clink at St. Tudy.  His own father had been a Freemason, and the Buffaloes are known as “the Poor Man's Freemasons”.  We have also found newspaper reports of him accompanying the St. Tudy Bellringers on their annual outing, so the people of St. Tudy obviously did give the Schusters that “warm welcome” that was expected when they left Down Hatherley.

The Buffs in St. Tudy closed the group in 2002 due to lack of numbers, but still have Lodges in Bodmin and surrounding areas.